What Is Column and Classification Of Columns

What is a Column

Like In our human body bones give strength as well as transfer over bodyweight to bottom i.e. to over legs, in the same way, the different loads that are generated in a structure are transferred by column to footings and footing to the soil. So, the column plays an important role in the whole load transfer mechanism and without it structure doesn’t exist.

Columns can be classified into various types based on loading, length, column ties, frame bracing, etc. The types of columns used in construction are as stated below:

Based on Column Ties 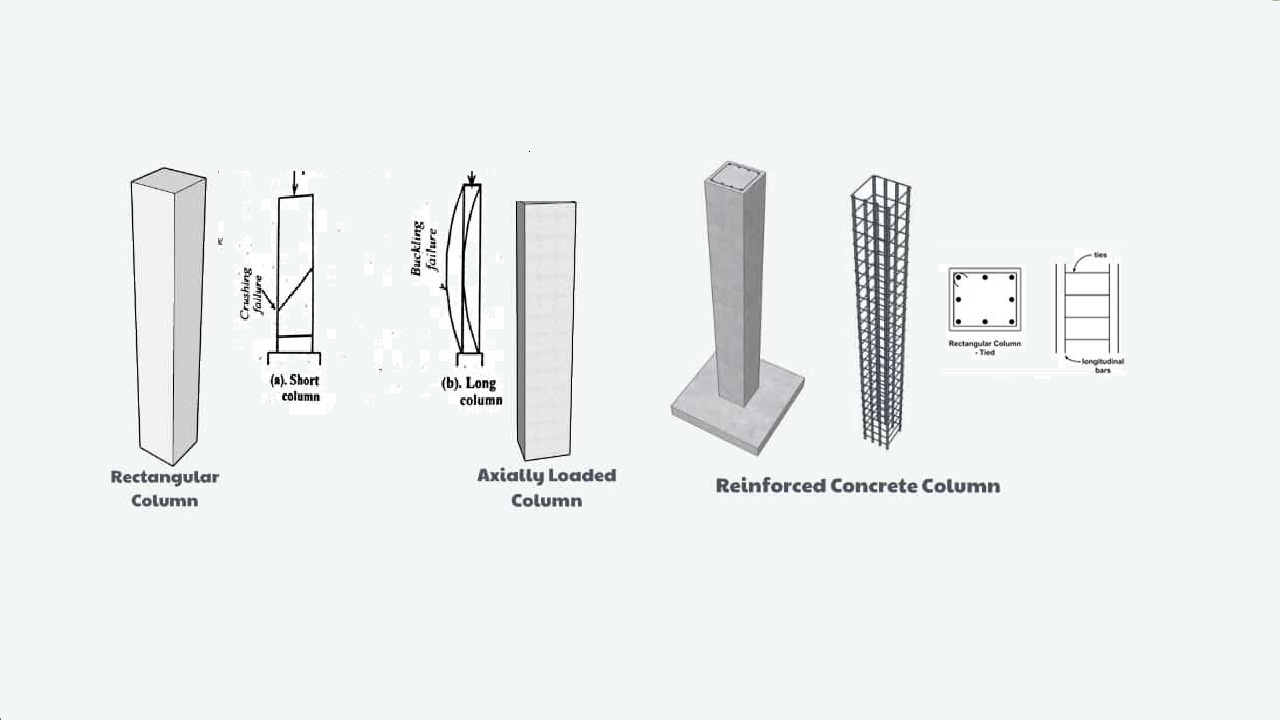 Based on Slenderness Ratio

Based on Shape of Cross Section

Based on Construction Materials

Based on Frame Bracing

When the line of action of the Compressive force coincides with the center of gravity of the cross-section of the column, it is called axially loaded column. The total load from the upper section is acted on the centroid of the column.

In this type of column, loads are applied at any point of cross-section but not in axes. Loads cause moments about both the x- and y-axes simultaneously.

Classification based on Ties

In this type column, the longitudinal bars are fixed with smaller bars. The smaller bars are placed at a uniform level up the column and are properly spaced.In non-seismic regions 95 % of the buildings are constructed with this type of columns.

Classification Based on Slenderness Ratio

A pedestal is a compression member having a height less than three times its least lateral dimension. Pedestals need not be reinforced and may be designed with plain concrete.

If the ratio effective length of the column to the least lateral dimension is less than 12, the column is called the short column.

When The ratio effective length of the column to the least lateral dimension exceeds 12, the column is called the long column. Bending deformation increases as the slenderness increases. Long column fails due to buckling effect which reduces load-bearing capacity.

Classification of Column Based on Shape of Cross Section

L -shaped columns are used in the corner of the boundary wall and have the same characteristics of a Rectangular or square column. This type of column is very unpopular.

As the name suggests these types of columns are used if the shape of the room is trapezoidal. This type of column are a little bit expensive as it requires more concrete.

This type of column are used if the design requires it. It is mainly used to construct bridges, pillars, etc.

Classification Based on Construction Materials

This type of column is composed of concrete as a matrix. The steel frame is embedded in concrete. Concrete carries the compressive load and reinforcement resists tensile load. The reinforcing materials can be made of steel, polymers, or alternate composite materials.

Composite columns are a combination of two traditional structural forms: structural steel and structural concrete. As composite columns were generally developed after steel columns and reinforced concrete columns, their design approach could have been based on either steel or concrete design methods. This type of column has great fire and corrosion resistance also.

Steel also a widely used construction material. However, due to the limitation in steel as a material, sometimes use of the steel in construction is discouraged.

The cost of the construction could be in the same range.

Timber columns are made of wood timber. They provide an aesthetic appearance creating a feeling of space and openness. Timber columns are designed for housebuilders, reception areas, and refurbishment properties.

Brick columns are found in masonry structures. They can be reinforced with concrete to increase strength or can be unreinforced. Brick columns can be a round-shaped, rectangle, or square, or elliptical in cross-section.

Classification of columns Based on Frame Bracing

A Column is said to be braced in a specified plane when the lateral strength to the structure, on the whole, is arranged with a wall or bracing or buttressing to withstand all lateral forces in that plane.

Braced column is treated as braced in a specified plan when the lateral strength of the structure as a whole is arranged with walls or bracing.

If relative transverse displacement among the upper & lower ends of a column is not restrained, the frame is defined as an unbraced column.

Unbraced column is treated unbraced in a specified plan when lateral strength of the structure as a whole is arranged with columns only.

Other Types Of Columns

Prestressed columns are considered as an extension of ordinary reinforced concrete columns where reinforcing steel is used to resist tension. Prestressing introduces additional

advantages to concrete columns. It transforms a cracked section into a non-cracked one, thus enabling the entire concrete section to resist bending moments.

Prestressing yields a homogeneous member with reliable buckling capacity which is important for slender columns.

The evolution of columns in the ancient world has been classified within architectural orders. The three principal orders are Doric, Ionic, Corinthian, and Tuscan.

In the Greek world, the first order was Doric whose columns were wider at the bottom and had a simple capital but no base. Ionic columns stand on a base and have a capital in the form of a double scroll (volute). Corinthian columns are usually slimmer and taller, stand on a base, and have a richly decorated capital, usually with sculpted flower and leaf decoration.

The Romans introduced the Tuscan column which had no flutes and a simple base and capital. Roman Doric columns were similar but with flutes.

Thus to conclude we must say that columns are very important members in the structural system. Failure of a beam or a slab will not as sudden and will definitely give you the amount of time for moving out or repairing the structure. However, the absence/failure of the column may lead to the failure of the building. During the designing phase of the building, architects must meticulously plan the construction of Columns.